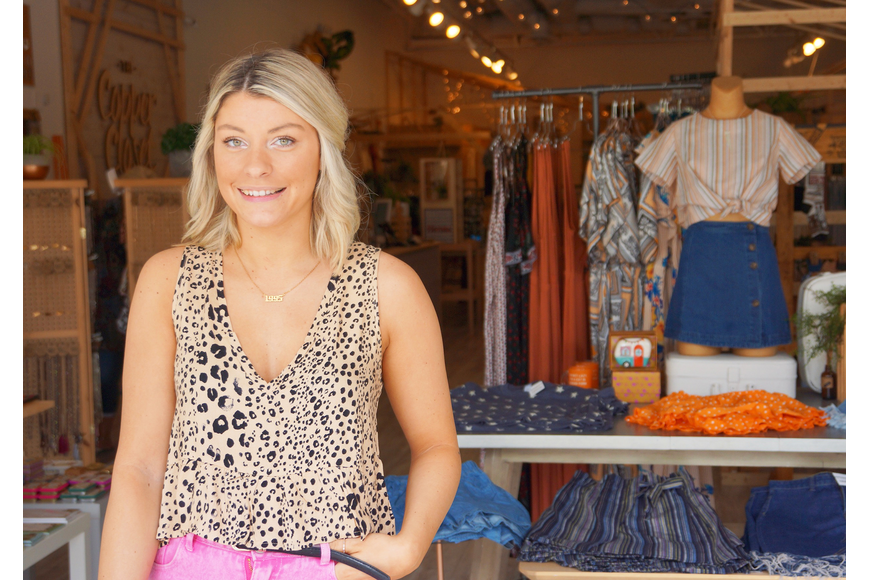 Danielle Dallas maxed out her credit cards three years ago to start her boutique, which now has 10 locations and is about to begin franchising.

As a college student managing a high-end boutique in Gainesville, Danielle Dallas often saw a lot of clothes in the store she liked, but could not afford.

She wasn’t the only disappointed customer. She frequently would watch girls her age come into the store, find a piece they liked, but leave with nothing because the price was too high.

Dallas, then 21, wondered why there weren’t more affordable boutique options. She decided to fill that void.

She started buying and selling merchandise online out of her bedroom, which she said “looked like a stockroom.”

She was able to save enough money, along with maxing out her credit cards, to open her first Copper Closet store in 2016 in Riverside.

All items in her boutiques are priced less than $50 and are organized in a way that’s not overwhelming to the customer.

Today, the company operates 10 locations in the Southeast from Melbourne on Florida’s East Coast to Charleston, South Carolina.

The next location will open in September in Tampa. Dallas said there will be 13 stores open by the end of the year.

Last year, Copper Closet did $2.1 million in sales with five stores. The year before, sales were half that with three stores.

Despite the risk she took in opening the first store, the 24-year-old said recently she had a sense the initial investment would pay off.

Starting as a sales associate at Victoria’s Secret, she was promoted to a position in the visuals department, designing store displays. She then worked for accessory store Charming Charlie in a similar role, which helped her learn what was selling and how to best capitalize on that.

Dallas also saw the mistakes those companies were making, and made sure not to do the same with her business.

Through her experience at the boutique, she learned what items people want to see, and how to price them.

Even with that retail experience, opening The Copper Closet was “a little stressful.”

“Being all-in to something and not having an option for it not to work is really important for anyone who’s opening a business,” she said. “But (succeeding) was my only option. I quit my job, I moved to a new city where I didn’t know anybody and I was just hoping it was really going to work. And luckily it did.”

Dallas has two Copper Closet locations in Jacksonville at The Avenues mall and St. Johns Town Center. The Riverside location closed, but Dallas said she hopes to relocate to another storefront in the neighborhood on Park Street.

Part of the reason for the stores’ success so far, she said, has been because of the price point and the setup.

The displays are clean and uncluttered, she said. People often come into the store expecting it to be a more expensive shop.

“People get a good kind of sticker shock when they walk in,” Dallas said.

Dallas said she usually works seven days a week, five in the home office at St. Johns Town Center and on weekends traveling to the other stores throughout the region.

She designs the company’s ads, Instagram posts, helps oversee the models and handles the inventory.

Because she’s selling to her demographic, she said she has a better idea of what customers want to see.

Her husband, Ryan Viti, who owned a recording studio for 10 years, sold his company to help Dallas with hers.

He handles more of the business aspects that stress her, she said.

Next year, the company will begin franchising locations. Her ultimate goal for the store is to be the next Francesca’s women’s clothing and accessories chain, but bigger and more affordable.

“It would be awesome if you could go to almost any mall and you could find a Copper Closet,” Dallas said.

Franchises will cost less than a typical women’s clothing store so that more people can afford to start a business, she said. Dallas said she also wants to help more women become business owners.

In July, Dallas branched out into the home decor business with a new concept, Mod+Mkt.

Much like The Copper Closet’s model, the store will offer affordable home decor.

If the store, which is slated to open at St. Johns Town Center this month, is successful, she said she’d consider adding locations.

At times for Dallas as a young woman in business, she said people don’t take her seriously. But as the company grows, so has the respect.

“Word gets around a little more about our company and the things we’re doing and the places we’re going.